As part of the justification for this Proposal, the adjoining subdivision Campbell’s Run was used as a comparator. The design of the current version of the Proposal should therefore be assessed by comparing it with Campbell’s Run.

What emerges from that comparison however, is not similarities, but a stark contrast. Compared to the subdivisions either side of it that have been sensitively designed, 510 Beach Road is poorly planned as a result of trying to squeeze too many lots into the available land. There is also potential for effluent run-off onto both sides of Beach Road and fertiliser run-off from lawns and gardens into Coomonderry Swamp. 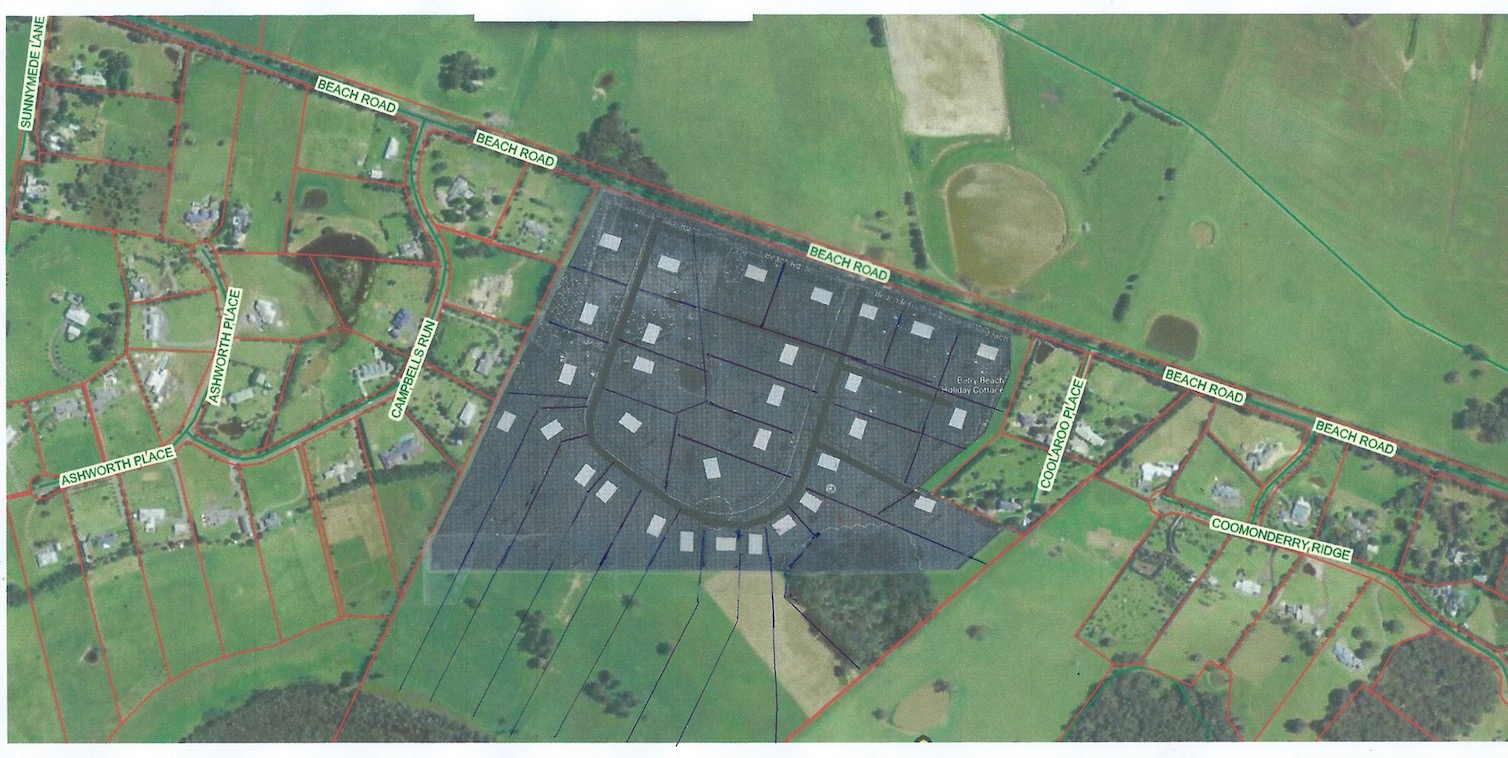 As a result of the high density proposed, the blocks are narrow and arranged like a city subdivision. Campbell’s Run has generous frontages of more than 100m in its lots, whereas the frontages for 510 Beach Road are around 22m. The seven lots uniformly aligned along Beach Road and the ten positioned side by side along the ridgeline (not complying with DCP performance criteria) have the look of an urban housing estate.

The majority of the lots are smaller than those in the adjoining subdivisions. There are ten large lots to the south of the site, but the bulk of each lot consists of a south facing slope towards Coomenderry Swamp. This results in the ten dwellings having to be clustered very close together along the ridgeline.

We are also informed that the useable area of the ten lots for building envelope, water storage and effluent management is less than half that of the equivalent Campbell’s Run properties that back onto the Swamp. This means that the requirement of a minimum area of 1 hectare of useable land imposed on the Campbell’s Run lots is not achieved in the design for 510 Beach Road. This precedent should not be ignored and could be rectified by merging the ten lots into five to allow for a wider frontage.

The small frontages and close building alignments, compared to the neighbouring estates, will convert a beautiful rural landscape to look more like an urban suburb, completely out of character with the other subdivisions. This will have a negative impact on the semi-rural look and feel of this environment.

With significantly smaller useable space, the lots on the ridgeline are not large enough to collect and store rainwater in a sufficiently sized water tank, or to provide enough open space to dispose of waste-water using an envirocycle system in a safe and hygienic way. This creates the potential for run-off on to Beach Road.

Conclusion
The key issues with the proposed subdivision are –

The subdivision proposes 31 residential lots, one more than Campbell’s Run, but in a significantly smaller area due to topographic constraints. This has resulted in an urban design for a semi-rural area. The poor design of this Proposal would set an unacceptable precedent and the number of lots should be reduced by a minimum of eight to align with the perceived density of the adjoining subdivisions.